Crisis Management 101 | How to foolproof the worst-case scenario

Before we start diving into the topic of crisis, let’s all collectively find a piece of wood to knock on. No company ever wants to find itself caught up in a crisis, but as they say, failing to plan is planning to fail.

When I first started learning about crisis management in uni, I was happy to see that my overthinking was good for something. It’s the one time in communications where you’re allowed to sound as worst-case-scenario as you want and it’s actually sort of productive; but only if you make a plan to strengthen your response.

What is Crisis Management?

In its simplest form, crisis management is the initiative that your organization takes to protect its reputation and image during a crisis. Ahead of a crisis, it can (and should) involve a list of things that could go wrong, the risk factor of each of those, and then a plan for what to do if you are faced with a crisis. If you do find yourself in a situation, it’s the way you and your team will manage the outcome as well as communicate problems and solutions.

A crisis is defined as a sudden, urgent and essentially life-threatening situation for your business. It comes out of nowhere and can leave you feeling scared and worried about the outcome. While some situations could really suck, like launching a new product that flops, they’re not a crisis unless they’re seriously life or death to the business itself.

What can actually go wrong at a startup?

Let’s say you’re a startup like we are at Chapter. Just because you’re not a multi-billion pound company like Amazon or Tesla doesn’t mean you’re immune to crisis. You’re still offering a service or product where things can go wrong. While they may not be on a world-shaping scale like the 2010 BP oil spill, they can still impact your agency’s reputation in the marketplace and seriously affect your company’s livelihood.

Some things that could go wrong:

While we try to be as uplifting and positive as we can, it’s important to admit that sometimes things go wrong. And that’s okay – as long as you have a plan in case they do. 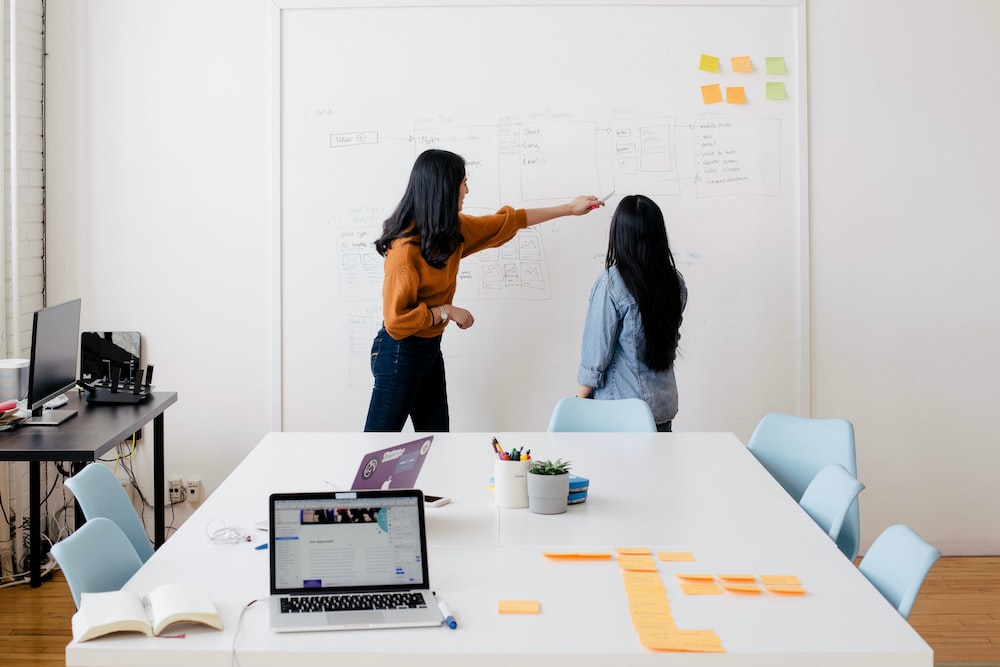 Apart from identifying potential risks, planning for what you would do when faced with a crisis can be quite simple. The aim is to build a framework that can easily be built on if needed:

So you wake up one day and it’s the worst-case scenario. Alarm bells are ringing and you have to quickly snap into action. Because you set up your framework already, you now have the bones to build up your strategy. At this point, the plan will be a lot more specific to the situation you’re facing, but the important things to remember are:

This is the time for you to review what happened and how you can improve the process. This isn’t necessarily preparing for another crisis but instead mitigating some risks you may have identified in your pre-crisis planning stage. This helps you lower those risks and be vastly more prepared in the long-run. 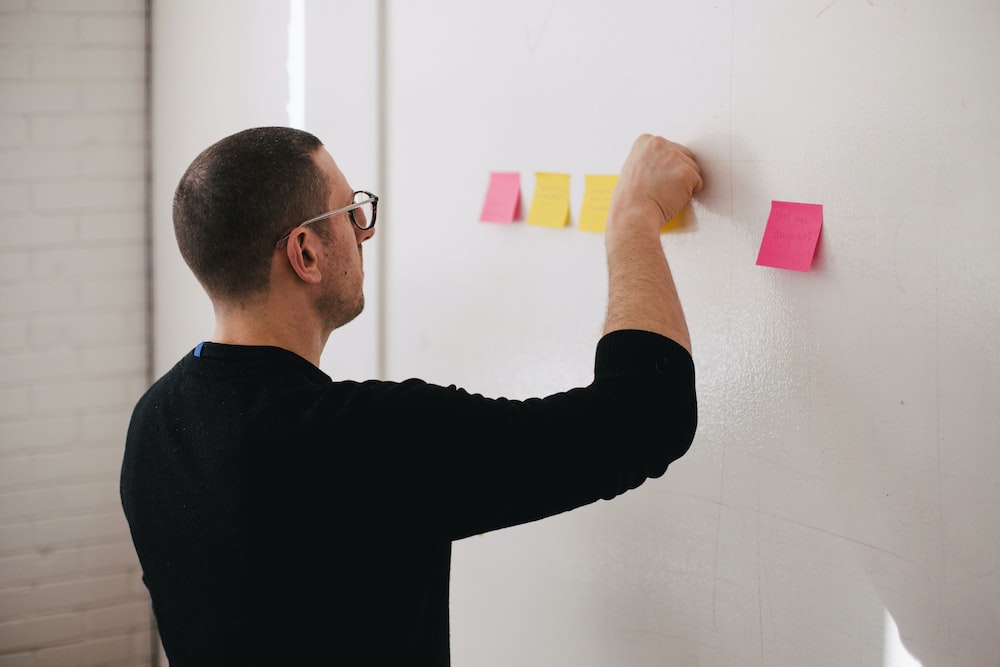 The Good and the Bad of Crisis Management

There have been many big-scale crises in the world. Learning from their mistakes is a great way to start thinking about your own crisis strategy and how you’d react in these situations. Start thinking about crises that happened to your direct or indirect competitors as well as those in your industry.

Who did it well

Johnson & Johnson
An old one that still hits PR classrooms today as a case study, the 1982 Johnson & Johnson cyanide-laced Tylenol capsule crisis is regarded as one of the most successful sequences of crisis management. J&J put its customers first and pulled $100 million worth of products from its shelves and got involved with the police investigation, offering $100,000 as a reward to find the culprit for the murders. Post-crisis, they went further by reintroducing their product with a tamper-proof seal to win back customer trust.

KFC
Delivery delays led to chicken shortages in 870 KFC shops across the UK and Ireland. The team got to work immediately to rearrange the brand’s letters to spell “FCK” on the bucket in their ads, owning up to the mistake in a light-hearted humourous way. They also set up a page where customers could check in on the chicken status of their local restaurant. They were honest, open, and most importantly, really funny about the whole situation. 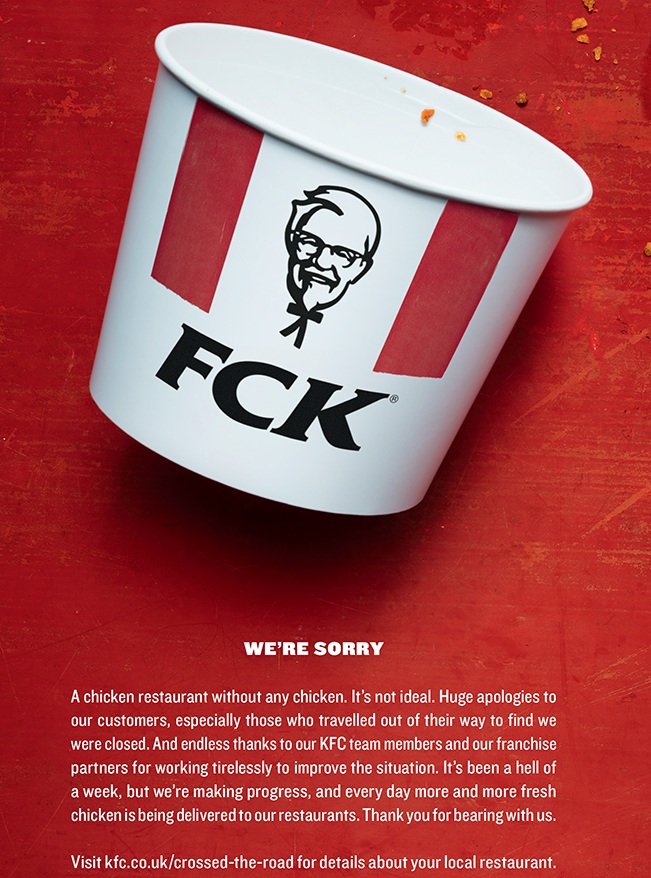 Who did it wrong

Southwest Airlines
Southwest Airlines was struck by a huge technology failure in the summer of 2016 when key systems went down for up to 12 hours. This led to four days straight of teams responding to customer complaints, mainly by leveraging their social media channels. Updates were posted, but the onslaught of complaints overwhelmed the department with some customers not receiving responses for days, if even at all. But where did they go really wrong? Instagram slipped through the cracks with no apology or acknowledgment posted as well as hundreds of unanswered angry comments. Moral of the story: know which channels you have and don’t neglect them during a crisis!

Cadbury
Not the first time coming under fire, Cadbury had to recall seven of its products across the UK after it discovered salmonella contamination in June 2006. When word got out that the company knew of this outbreak since January of that year and didn’t tell health officials, they were justifiably scrutinized by the media for their failure to protect their customers’ health. They went against the usual crisis management strategy of being open and honest which backfired and still leads to mistrust in the brand by some people today.

There’s no one-size-fits-all approach to a crisis. Just like how every crisis is not the same, the response will never be the same. It boils down to some key points: be prepared, own up to your mistakes and communicate early and often. Transparency always wins. With a plan in place, you can get through it and come out stronger as a business and a team.

Feeling motivated? We have you covered! For more stories on Startups & Entrepreneurship, check out our list here.

Reactive Marketing | The Secret Sauce to Your Strategy

We’re spilling all our secrets and sharing our favourite tools, tricks and tips for all…
Read More →

She has a way of reeling you in. Her charisma, down-to-earth ease and accessibility instantly…
Read More →

Sign up to our newsletter and be the first to hear about our latest brand stories, interviews, advice and inspiration

Download this because its awesome. Short description for the asset, blabla.

Download this because its awesome. Short description for the asset, blabla.

This website uses cookies to improve your experience while you navigate through the website. Out of these, the cookies that are categorized as necessary are stored on your browser as they are essential for the working of basic functionalities of the website. We also use third-party cookies that help us analyze and understand how you use this website. These cookies will be stored in your browser only with your consent. You also have the option to opt-out of these cookies. But opting out of some of these cookies may affect your browsing experience.
Necessary Always Enabled
Necessary cookies are absolutely essential for the website to function properly. These cookies ensure basic functionalities and security features of the website, anonymously.
Functional
Functional cookies help to perform certain functionalities like sharing the content of the website on social media platforms, collect feedbacks, and other third-party features.
Performance
Performance cookies are used to understand and analyze the key performance indexes of the website which helps in delivering a better user experience for the visitors.
Analytics
Analytical cookies are used to understand how visitors interact with the website. These cookies help provide information on metrics the number of visitors, bounce rate, traffic source, etc.
Advertisement
Advertisement cookies are used to provide visitors with relevant ads and marketing campaigns. These cookies track visitors across websites and collect information to provide customized ads.
Others
Other uncategorized cookies are those that are being analyzed and have not been classified into a category as yet.
SAVE & ACCEPT